News from the same period

On 11-12th June 2008, Computer Emergency Response Team (CERT) representatives from CERT-Hungary, the Bulgarian State Agency for Information Technology and Communications and ENISA met in Budapest, Hungary to exchange good practices in setting up a governmental CERT or Gov-CERT.

A previous meeting took place in Sofia, Bulgaria, on 22nd April 2008. During these meetings, good practices have been shared and training provided to Bulgaria, which is working on establishing a national Gov-CERT. 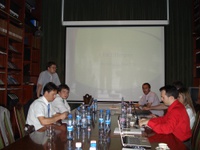 and Hungary began in 2007. ENISA facilitates this successful collaboration in the context of the European NIS Good Practice Brokerage as established under the auspices of the Agency’s Work Programme.

Since 2007, ENISA has acted as broker between those willing to share and those wanting to learn good practice in certain NIS areas. As such, the Agency supports, for instance, the brokerage between Finland-Slovenia on awareness raising and Dutch-Hungarian discussions on a structured cyber crime-related information exchange, to be expanded to other countries. In addition, ENISA is preparing to support Finland in their cooperation with South Africa to develop a CERT for the latter.

We use cookies on our website to support technical features that enhance your user experience.
We also use analytics. To opt-out from analytics, click for more information.